Exports of natural Stone from BrazilThe exports of Brazilian natural stone exports in 2019 surpassed one billion US dollars (1.012.059.91) and, in quantity, reached the figure of 2153439.87 tons, which meant a positive variation of almost 2 % in sales and almost 2% decline in volume compared to 2018. The average sales price of exports thus increased approximately by 4%. 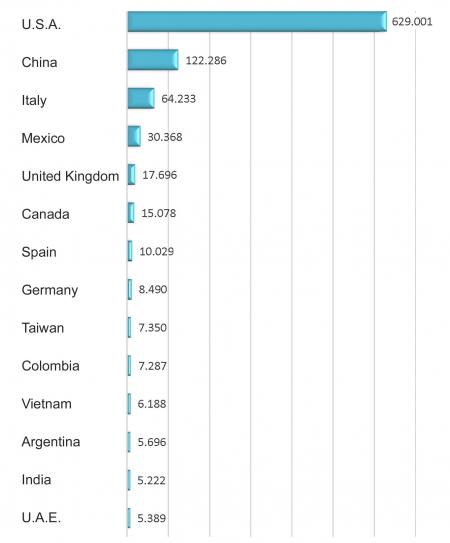 The exports with higher added value showed an increase, above all in marble tiles (970 dollars/ton), soapstone products (730 dollars/ton) and specially quartzite tiles (US 2000/ton). The decline in volume of block exports and granite slabs is a result of pressure from porcelain and artificial materials in the international markets and specially in USA.
Main destinationsBrazil exported ornamental rocks to 119 countries in 2019. USA accounted for 62% of the turnover, followed by China (12.1%), Italy(6.3%), Mexico (3%), UK (1.7%), Canada(1.5%), and Spain (1%). The other 112 countries accounted for only 12.4% of the exports.
Sales to USA, Mexico and Canada are mostly of slabs, while the blocks are sold to China. Italy and Spain buy blocks, tiles and slate products. UK buys basically slate tiles. USA is also a good market for slates for cladding.
Brazilian imports of natural stoneThe Brazilian imports of natural stone for decoration and cladding reached US$ 24.2 million, 46.5 thousand tons in 2019, a negative variation of 20% and 13.9% respectively, compared to 2018.
The main suppliers were Italy (10300 tons), Spain(10200 tons) and Turkey (8100 tons). In decreasing order, Indonesia,China, Greece, Mexico and Portugal also had some share, all with 1000 tons.
The marbles of Carrara and Boticcino come mainly from Italy, apart from Travertino Romano and Navona; Crema Marfil is the main material supplied by Spain.
SectionsIndustry StatisticsRelated ArticlesBalance of exports and imports of ornamental rocks in Brazil in 2008