Indonesia is a trade universe on its own. The world’s largest archipelago, it consists of 13,000 islands and has 260 million inhabitants. It is the 4th most populated country in the world, stretching over 5,000 kilometres from the Indian Ocean to the South Pacific. The population explosion, as elsewhere, is recent. But its geography is not. It helps explain the deeply ingrained habit of Indonesians to ship and trade.

Since 2000, Indonesia has seen almost consistent GDP growth rates between 4 and 6%, allowing record numbers of people to join the middle class. As a percentage of GDP, trade rose from 30% in the 1980s to 60% in the 2000s. Over the same period, GDP itself rose six-fold. The per capita GDP at purchasing-power parity rates at $13,000, and poverty rates are falling – though still substantial. The growth made Indonesia a “newly industrialized” nation, and a member of the G20.

What’s certain is that Indonesians join their president’s embrace of globalization in a way few other people do. In a widely cited 2016 YouGov poll, a large majority of 72% of Indonesians said they considered globalization a “force for good” in the world. In the same poll, their peers in the United Kingdom (46%), the United States (40%) and France (37%) showed themselves much less enthusiastic.

As far back as antiquity, Indonesian spices like nutmeg, mace and cloves made their way from their home in the Maluku islands to other parts of Indonesia such as Java and Sumatra, but also to faraway places including India, Greece and Rome. Trading for the Indonesians, then as now, is a fact of life. You need it to get the good stuff; you gain from buying and selling. It is embedded in Indonesia’s culture.

(From the article originally published in the WORLD ECONOMIC FORUM under the title ‘Why Indonesians fight like Avengers for globalization’. The complete article can be found here:

A serious number of megaprojects is planned or under construction in Indonesia for the next years.

Indonesia is the sixteenth economy of the world by nominal GDP and member of the G-20 most important economies. The country is described as recently industrialized country. Both private sector and state oriented activities have significant roles.

The government of Indonesia has approved a development plan for the next twenty years, starting from 2005.The plan is subdivided in five years intermediate plans, with each one of then targeting in different goals.

Infrastructure is one of the main targets under development. With a population of 260 million people the government is focus on the country’s growth. The progress of the construction and building materials sector includes the completion of a number of megaprojects, such as bridges, railways and power stations, to name some of them.

The most important Indonesian Megaprojects

Estimated cost: approximately $5.5 billion The trans-Java toll road will stretch from the ports of Banyuwangi in the East Java to Merak in Banten province in the West Java. The length of the major highway road will be between 800 km to over 1,100 km.

Estimated cost: approximately $1.7 billion to $2.3 billion Completion date: 2018 (not confirmed) The Jakarta Mass Rapid Transit Project consists of three phases of MRT rail links across Jakarta. Phase 1 will be a 15.5 kilometre North-South corridor with 13 stations. Phases 2 and 3 will extend the line northwards, around 8 km through Harmoni and Kota to Kampung Bandan in North Jakarta and later east-west, from Tangerang to Bekasi.

119 Estimated cost: $2 billion The anticipated fifth tallest building in the world will rise to a height of 638 metres, with 111 floors iin addition to 6 basement levels. It will be built in the Sudirman Central Business District in Jakarta. The construction is expected to be completed in 2020.

99 Pertamina Energy Tower, the proposed headquarters of Pertamina power company will 523 metres tall and gather all its power from wind, solar, and geothermal energy. The construction is expected to be completed in 2020.

Estimated Cost: $20 billion The Selaat Sunda Bridge will connect two western Indonesian islands of Sumatra and Java through road and railway. Stretching about 40 kilometres, it will be the longest bridge in Indonesia. 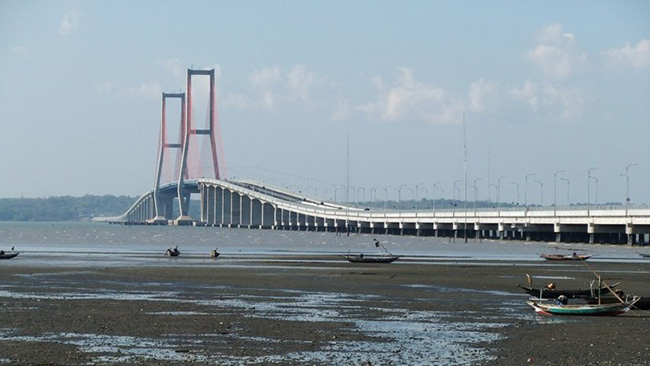 Estimated cost: $4 billion Indonesian firm PT Bhimasena Power Indonesia (BPI) is developing an ultra-supercritical coal-fired power plant, in Batang Regency, near Pekalongan. The plant, which will have a capacity of 2,000 MW.

Estimated cost: $US 1.04 billion When complete, two tracks will span the Jakarta-Surabaya Pantai Utara (North coast or Pantura) corridor of over 700 km. The completion of the double track system is expected to cut the travel time between Jakarta and Surabaya from the current time of 11 hours to under 9 hours and increase capacity from 64 trains to 200 trains per day.

At 389 metres tall, Peruri 88 will offer 360, 000 square metres of space for housing, offices and commercial use in addition to internal and external public spaces. The construction is expected to to be completed in 2020.

Estimated cost: $US 6.7 billion The Japanese Government is reported to have agreed to fund a feasibility study into the possibility of constructing a super-express train to travel between Jakarta and Bandung (144 km) in as little as 30 minutes. The trip currently takes around three hours. Indonesia has a population of more than 250 million people and is one of world’s fastest growing air travel markets. Jakarta, the country’s capital, officially opened a new airport terminal in August 2016. Domestic flights for the country’s national carrier, Garuda, began operating from the $560 million Soekarno-Hatta airport Terminal 3. The airport will then be able to handle a capacity of 62 million passengers a year once the renovated terminals are fully operational again in early 2018, compared to 54 million passengers last year, making it the 18th busiest in the world, according to the International Airports Council.

In Indonesia, new airport construction is part of wider government plans to improve the transport infrastructure in the country. Roads, railways, the Jakarta Mass Rapid Transit (MRT) and other infrastructure projects are providing huge opportunities for international construction materials suppliers, architects, engineers, designers and project managers, as well as investors.

As an emerging country, Indonesia is keeping pace with the development of other economies by setting its focus on government infrastructure construction and development. With a target of GDP growth between 7-9%, the country is investing heavily in improving the quality and quantity of its infrastructure. 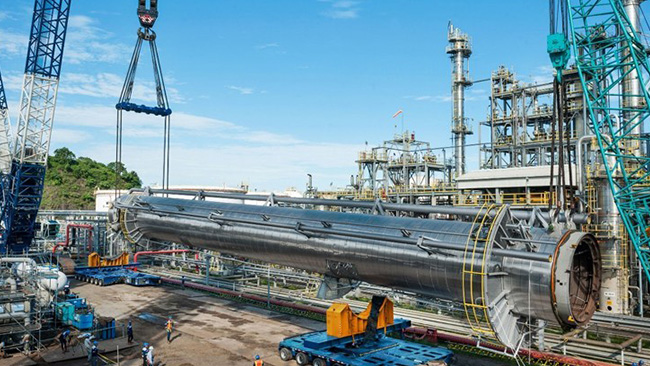 The Indonesian government see improved infrastructure as the key to unlocking the country’s economic performance and potential. A solid and reliable logistics network is vital to achieve this and the priorities are land, sea and air infrastructure, as follows:

Targeted to be operational in 2020, this is a US$11.25 billion construction project for a 2,600 kilometer freeway to connect Serang in Banten to economically strategic cities in Sumatra: Banda Aceh, Medan, Pekanbaru, Jambi, Palembang, Tanjung Pinang, Lampung and Bengkulu. The process of making the land available for this project has been accelerated and construction is in progress.

Modeled on the port of Rotterdam, Kuala Tanjung Seaport is part of the government’s vision for a ‘sea freeway.’ Currently at over 40% of construction completion, the Kuala Tanjung Seaport will also be supported by land based infrastructure, such as access to the freeway, railroad and gas-fueled power supply.